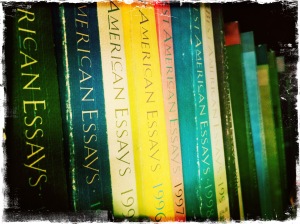 At Assay, we’ve dubbed Year 3 “Year of Best American Essays.” Our intrepid assistant editor Nick Nelson, who’s been with us since the beginning, has been working to make the reprints and Notables of Best American Essays into a searchable form, and his project will be released in the next several months. He started the project in the fall of 2014, before Assay published its first issue, and the scope has grown considerably as he has pursued it. The project is truly exciting, a wonderful and useful piece of work for our genre, and we are thrilled to share it with the world. Stay tuned for the release date.

2016 is the 30th anniversary of the Best American Essays series and we can’t think of a better gift than attention paid to this institution that forms so much of who we are as a genre. Essay Daily started things off so well with their Advent project in December–and if you haven’t checked it out, you’ll want to. Best American Essays, as a literary series and foundational element of our genre, is such a rich source of conversation. As we also celebrate BAE’s anniversary and Nick’s project, we will devote a section of the magazine in both 3.1 (Fall 2016) and 3.2 (Spring 2017) to interrogating BAE as the standard bearer of the genre, the pedagogy of teaching with it, analysis of individual pieces, and any other place creativity strikes.

We’re looking for full scholarly articles, we’re looking for informal discussions, we’re looking for pedagogical theory, lesson plans, assignments, and more. The introductions to BAE have long been considered the beginnings of nonfiction theory–where does that put us as a genre? If you’re not sure what you’re working on is something we’d be interested in, please ask us!

We continue to read and accept general submissions, so even if your current work isn’t on BAE, we’d love to see it. Deadline for full consideration for the fall issue is May 1, 2016; deadline for the Spring 2017 issue is December 1, 2016.  Click here for the link to the full guidelines.