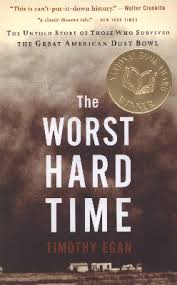 Most aspiring writers are told to show not to tell. Showing, it is believed, helps create scene, imagery, feeling–all without telling the reader what to think, what’s important. And yet book-length historical, creative nonfiction works pose a unique conundrum: How to show rather than tell; it’s easier to tell the events of history: This happened, then this happened, then this happened. Throughout the narrative arc of his masterful work, The Worst Hard Time, Timothy Egan braids subtle, and yet revealing, details about the historical context of the Dust Bowl.

In Chapter 17 of his work, titled “A Call to Arms,” Egan continues the tension that has been building throughout the book: “And for the first time, a term entered the nation’s lexicon. It came from another of Geiger’s dispatches, a throwaway phrase that was part of a larger point he wanted to make.” And Egan continues to weave the suspense into the following paragraph, quoting from Geiger: “‘Three little words, achingly familiar on a Western farmer’s tongue, rule life in the dust bowl of the continent–if it rains.'” And this is where Egan brings his skill as a writer to bear on the significance of Geiger’s sentence. Through research and reflection, Egan draws the reader’s attention not to the three words the reader is led to believe are the most important–“if it rains”–but to the two words that are now synonymous with the 1930s: Dust Bowl. In some ways it seems odd that a reader must way until seventeen chapters into a book to hear the story of how the term Dust Bowl came into being, but after the history, the harrowing stories of dryness, the little newspapers story slips in sideways like a whisper during dinnertime conversation.

By the third paragraph Egan shifts into the jewels that are a part of his writing: creative nonfiction writing infused with thorough research. In talking about the time immediately after what came to be known as Black Sunday, Egan writes, “The weather pattern that produced the storm was not out of character, especially for early spring.” The reader, in this way, is then confronted with the task of believing Egan’s ability to conduct thorough research along with creating a pleasant image–“It was a day like any other day…” And that is, perhaps, the freshness in Egan’s writing: Normal historical accounts can be dry, dull, and, on the rare occasion, droll, but in his own way–due to his comprehensive research–Egan is able to create believable scenes that place the reader into visual moments of narration.

But then Egan asserts this claim to paint the scene in richer hues: “A mass of polar air had moved south from Canada, colliding with the dome of high pressure over the plains.” The reader can see the air, cold and crisp, and a large, undulating “mass” migrating from the cold country of Canada. “As the heavier colder air pushed down a prairie lane, it drove the winds and caused the extreme, sudden drops in temperature.” Egan not only provides a weather-related history report, but presses to the edges of historical narration with vivid imagery–“prairie lane,” “dome,”–as if helping the reader see the polar air migrating over the arid plains.

Egan, too, creates a balance that borders on the edge of being skeptical. For instance, in the third paragraph Egan says, “Newcomers wondered if it blew all the time.” At this point–which is largely a passing comment–Egan helps place the reader into the overall sensibility of the time period. Egan doesn’t explain whom these newcomers are, where the information is coming from, but, rather, makes a blanket claim about the feeling of the time period. “The standard answer was that the wind would shriek for ten days and then blow like hell for another five.” This, bit by bit, presses against the received conventions of academic research, constructing sentences brick by brick, leaving little room for argument.

Again, Egan shifts and helps bring vivid description to his prose in one, short sentence: “But long dry period were as much a part of the Great Plains as the grass itself.” Here, Egan shifts the timbre of his paragraph, focusing on the geological features of the Great Plains–the grass–and linking it to the new normal: “long dry periods.” Perhaps this is when Egan links the most common association with the Great Plains–grass–to another quality: Dryness. Swirling around the often common perception of a vast open wasteland, devoid of any features.

Egan continues the vivid vocabulary throughout the remainder of the paragraph with words and phrases, such as “matted sprouts,” “winter dormancy,” “ancient dunes,” “anchored by grasses,” “unforgiving sun,” and “pulverized.”

Throughout his lengthy and weighty book, Egan brings the reader into scene, highlighting the landscape, mentality, and reaction during the times of the Dirty Thirties. Compared to other historical, narrative books, Egan weaves imagery into the narrative, creating crystalline pictures for the reader as she progresses through this masterfully told story. Though the historical accuracy of Egan’s book is correct, in a book length work of creative nonfiction such as Egan’s, there is still room to reimagine the concept of the prairie. A landscape many depend upon for food, for survival, and the work of others, the Great Plains has yet to truly recover from the worst hard time.

Would you like to contribute to our weekly Wednesday Writers to Read? Our submission guidelines are here and click here to submit your own! If you have questions, drop us an email!