AWP20: A House of our Own: A Tribute to Sandra Cisneros 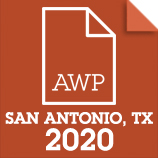 Description: Sandra Cisneros is best known as the author of The House on Mango Street and a MacArthur “genius” grantee. Yet a powerful aspect of her legacy began 25 years ago in San Antonio, when she founded the Macondo Writers Workshop by gathering writers around her kitchen table and imploring them to think about their conscience. Five acclaimed Latinx authors who have been deeply influenced by Cisneros in both their art and their activism will pay tribute to their mentor/muse/madrina.

Sandra Cisneros is the influential author of The House on Mango Street and a MacArthur “genius” grantee. Yet a powerful legacy began 25 years ago in San Antonio, when she founded the Macondo Writers Workshop of LatinX writers in San Antonio and implored them to support each other and their art. Five acclaimed Latinx authors influenced by Cisneros in art and activism paid tribute to her in this session.

Host Stephanie Elizondo Griest introduced the panel by asking “to AWP or not? The past five months caused us to rethink our collective outrage,” she said.  Immediately Griest confronted the controversy of Cisneros blurbing Jeanine Cummins’ controversial American Dirt, noting that House on Mango Street has sold 20 million copies and been interpreted in 20 languages, and that Cisneros had been a key supporter of many LatinX writers. Cisneros refused to give an interview to Texas Monthly, Griest said, until they hired a LatinX reporter.

Natalia Trevino, Northwest University Vista College Professor of English and author of VirginX, began by reading a poem describing a family snorkeling expedition in the Yucatan, during which she dove into the depth of a sacred cave, angering her father.  “Your spirit became the edge of the ocean and earth,” she read, turning the poem to a homage to Cisneros. Trevino told a story of arranging a San Antonio detention center visit to girls by Cisneros. “Writing is medicine,” Cisneros told the girls, encouraging them –and their guards–to write. “Write to melt the glass in your heart.”

Liliana Valenzuela, poet, translator, and author of Codex of Journeys and Bendito Camino, followed by describing her relation with the “generous, complex, mercurial” Cisneros since 1987.  She discussed her difficulties in translating Cisneros’ polyphonc Woman Hollering Creek, with Cisneros’ help, and with Cisneros insisting Valenzuela’s name on the cover. A translator “lives each word” she said, of the music of Cisneros’ language. She read a poem about volcanic hot springs, dedicating it to Cisneros.

Reyna Grande’s five books include Across a Hundred Mountains and Dancing with Butterflies, which won the American Book Award, came next. Her memoir, The Distance between Us, is about illegally immigrating from Mexico at age nine, a topic she took up in a New York Times Op Ed. Grande is always aware her successes would not have happened, she said, if “it hadn’t been for Sandra, and other Latina writers, fighting for the right to be published.”  She came to Cisneros’ House on Mango Street in the “darkest moment of my life” living with an alcoholic, abusive father arrested in the middle of the night after her stepmother was hospitalized. Her English professor handed her, The House on Mango Street. “It was amazing… to see a book where I could see I existed,” she said. Later in life, after they met, she recalled the advice, “Don’t write about the things you remember,” from Cisneros told her. “Write about the things you want to forget.”

Stephanie Elizondo Griest followed. The Corpus Christi-raised author of Mexican Enough: My Life Between the Borderlines All the Agents & Saints is associate professor of creative nonfiction at UNC-Chapel Hill, Moth storyteller, and winner of a Margolis Award for Social Justice Reporting at the US border. Corpus Christi is “the New Jersey of Texas,” she said.  Her first writing assignment as a Washington Post intern was to interview McArthur genius grantee Cisneros.  “She started asking me questions, interviewing me,” Griest recalled.  “The only thing we had learned as Mexicans was that we murdered Davy Crockett,” she said. After reading Cisneros, she discovered her heritage.

Macarena Hernandez, former Dallas Morning News reporter, now Baylor University professor of Journalism, whose video work has appeared on PBS, spoke next. Hernandez began by listing all the LatinX authors Cisneros had blurbed in recent months.  “I had been plotting my exit from the Rio Grande Valley since seventh grade,” Hernandez said. When Hernandez bought her first house, with money she made by writing, she recalled Cisneros’ admonition to pursue her dream. Hernandez told funny stories about Cisneros’ love of dogs, and their shared experience of losing their fathers.

John Phillip Santos, San Antonio native, Rhodes scholar, poet, author and documentarian, teaches writing and mestizo studies at UT–San Antonio.  He has known Cisneros since 1983, “for most of my life that means anything.” She was “entirely literary, at the molecular level,” he recalled. “Sandra’s arrival in San Antonio transformed this city,” he said, of the thriving art and literary scene today.

To conclude the session, Santos read from a poem Cisneros sent to the event — from her new home in San Muigel de Allende, Mexico. “We are fire eaters in a season of raging conflagrations,” Cisneros wrote to the audience gathered to honor her.  “Wounded, who write in wounded times…. … to distill pain to epiphany… the heart ready to howl.  The reason we write is to cure our small eyes.  May we know always with the heart.”

With that, the session timed out and the audience of sixty raced to meet up with each other.

Ted Anton, Professor of English at Chicago’s DePaul University, is the author of four books, including Planet of Microbes and The Longevity Seekers (University of Chicago Press, 2017, 2013)