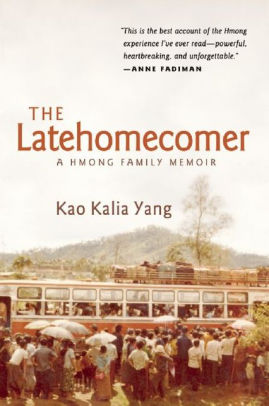 In November 2017, I giddily pointed my car north to attend the North Shore Readers and Writers Festival in Grand Marais, Minnesota. My four-day schedule was packed with author talks, writing classes, craft seminars, and panels to attend.

I was pleased two of my sessions would feature Hmong writer Kao Kalia Yang. Her memoirs, The Latehomecomer (Coffeehouse Press, 2008) and The Song Poet (Metropolitan Books, 2016), had long been on my seemingly endless to-read list, and anticipating her panel and author talk gave me the push I needed to submerge myself in her words.

Yang begins The Latehomecomer with a timeline-like, third-person story of her life which pushed me to consider my knowledge about the Hmong living in my home state of Minnesota and reflect on the challenges and advantages of my life as someone less than a decade younger than Yang. She frankly explains: “Hmong is an ethnic minority. We don’t have a country. We are here looking for a home” (4).

While reading the memoir, I was reminded of my privilege in living the majority of my white, middle-class life in the Minnesotan landscape which has consistently brought me comfort and relative safety. During her panel discussion in Grand Marais, Yang asserted, “my life’s existence is inherently political….Too many people have died so I could be here,” and in the memoir, she cynically notes: “There was no acknowledgement in the test to enter America that more Hmong than the thirty thousand who had been paid to fight had fought. We fought during the war and after it, fleeing into the jungle, just to hold on to our family and survive” (101).

My discomfort while reading Yang’s words is part of why I’ve made a point of introducing my students to contemporary regional writers and publishers, writers of color, queer writers, female writers, disabled writers, and other marginalized writers. I teach in Duluth, on the shores of Lake Superior, and my students are predominantly white, middle class. Significant numbers of them come from rural areas where diversity is marked by economics and class. Their families may still joke about mixed marriages between Catholics and Lutherans. Even so, in my experience, my students are hungry for perspectives beyond their own, beyond the expected classic literature, and beyond the mainstream, as well as voices from the supposed flyover country they harken from. In other words, books like Yang’s.

As Yang narrates her post-secondary education, she reveals: “I could not translate all the things I was discovering at college to my mom and dad, to my home. But I could not help but apply them….I started to understand one of the many truths that governed life: by documenting our deaths, we were documenting our lives. The Hmong had died too many times, and each time, their deaths had gone unwritten….I wanted the world to know how it was to be Hmong long ago, how it was to be Hmong in America, and how it was to die Hmong in America because I knew our lives would not happen again” (214-215).

Yang’s memoir weaves together her life’s experiences with her family’s (both immediate and extended) and the wider Hmong community’s into a lyrical tapestry detailing their challenges and hard-won triumphs. Hmong is a tonal language, and though one is unable to audibly hear Yang speaking while reading her memoirs, the words carry the rise and fall of her voice.

She reflects: “I imagine bodies, looking as they were in life, different people’s faces and forms, walking about the place where they had lived, wondering where those they love have gone. Their spirits are like the wind blowing through the grass, grass that was green at the bottom but lighter up near the top, translucent grass tips that appeared pink in the late afternoon light. Sometimes, as I go through the motions of my life, I come across the smell of grass and water and I travel back to Ban Vinai Refugee Camp. It would be nice to find the scent in a bottle of shampoo or conditioner, in perfume—something that I could uncork and take inside of me, borrow forever. Ban Vinai Refugee Camp was the last place where my family was together, my mother and father and Dawb, my grandmother, may aunts and uncles, my cousins, and me” (62-63).

During her panel discussion and author talk at the festival, Yang identified precisely which details would sing to listeners and bridge divides in perspective and knowledge. In particular, her assertions that “What students aren’t told is political” and as a writer, “[she doesn’t] want to talk to the thinking part of you. [She wants] to write to the emotional part of you” because “good writing is about opening up the human experience” continue to resound within me.

Whitney (Walters) Jacobson is an assistant professor at the University of Minnesota Duluth and an assistant editor of Split Rock Review. Her poetry and creative nonfiction have recently been published or are forthcoming in DASH Literary Journal, Up North Lit, The Same, The Thunderbird Review, and Wanderlust-Journal, among other publications. ​

For more, visit Assay: A Journal of Nonfiction Studies