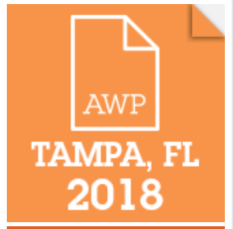 The genesis of this panel was a quote from poet and essayist Alexander Smith, who said “The world is everywhere whispering essays, and one only need be the world’s amanuensis.” He also called essays “the infinite suggestiveness of everyday things.” The panelists looked to the world of art not for what to essay, but how: what can we learn about essaying from other techniques in the art world?

Sarah Minor spoke on visual art and the essay – she herself works in “the visual essay,” where text and space work together, the visual arrangement of words in the space on a page. She argues for a shared language that bridges visual arts and creative writing spaces:

Joey Franklin spoke on hip-hop and the essay, about language/story/rhythm and the surprise of artful collage. Quoting Montaigne, “I am perpetually tricking myself out.” Franklin notes several similarities between hip-hop and essay composition:

Shawn Wen, “What Radio Teaches Us” – from radio, she learned cadence, silence, breath, how a line holds your mind and ear, and how to imitate speech. In particular:

Joe Bonomo spoke on Rock ‘n’ Roll and the Essay – how Aldous Huxley and Pete Townsend each claimed his art (the essay and the rock song, respectively) as a vehicle for any subject. He notes that while we come to the music that matters to us around puberty, we come to essays as adults. The essay moves forward as the shape of the author’s thinking and then circles back; rock tends toward a “5 paragraph essay” form – verse/chorus/verse/bridge/verse/chorus – though it may move away from this in jam sessions/live outtakes/etc. There is an ironic self-awareness in both

Elena Passarello spoke on theater and the essay. Because of the limits of performance (limited time and money for rehearsal), each actor breaks down a role into beats made of skill, tradition (what others have done with the role), energy, prep for role, research. The essayist often has a similar preparation before sitting down to write the essay. Yet for both the actor and the essayist, there is space for magic to happen in the moment of performance/writing. A repertory actor will create a different voice, stance, presence for each role – the essayist does the same for each essay, and an essay collection functions somewhat as a repertory of roles. Shared techniques include:

Poet and essayist Heidi Czerwiec is the author of the recently-released poetry collection Conjoining, and of the forthcoming lyric essay collection Fluid States, winner of Pleiades Press’ 2018 Robert C. Jones Prize for Short Prose. She lives in Minneapolis. Visit her at heidiczerwiec.com