“These Little Returns” by Desirae Matherly (NFNOW17 Panel: Talk 5 of 5)

Panel: “When Writers Repeat Themselves: New Disguises or Fresh Approaches?”

“These Little Returns” by Desirae Matherly

The subject of repetition has long been a concern of mine, ever since my very first nonfiction workshop in 1999. In that class I would read Philip Lopate’s introduction to The Art of the Personal Essay for the first time, and I would read his introduction again many more times, using it in my own workshops, sometimes able to recite passages from it as if it were holy scripture. In the section titled “The Contractions and Expansions of the Self,” Lopate describes one critical difference between memoirists and essayists:

A memoirist is entitled to move in a linear direction, accruing extra points of psychological or social shading from initial set-ups, like a novelist, the deeper he or she moves in the narrative. There is no need to keep explaining who the narrator or the narrator’s father or mother are at the beginning of each chapter. The personal essayist, though, cannot assume that the reader will ever have read anything by him or her before, and so must reestablish a persona each time and embed it in a context by providing sufficient autobiographical background. This usually means having to repeat basic circumstances of his life materials over and over–a wildly wasteful procedure, from the standpoint of narrative economy. Far better, you would think, for the essayist to get it over with once and for all and simply write his life story in a linear fashion. But for one thing, he may, in a fit of modesty, feel that his life story is not worth telling in toto, even if a portion of it seems to be.

I write only from the perspective of an essayist from this point on. I will likely never have the stamina to begin a story at the beginning and stay a true course through chapters into memoir. I find Lopate’s thoughts on repetition to be accurate in terms of my own experience. As a fledgling essayist, there was always a specific point along the timeline of my personal history that seemed relevant to whatever essay I was working on. In some place or another I felt compelled to bring up the subject of my father’s death.

My first personal essay written for my first graduate workshop was about guns, because my father had died from a gunshot wound when I was five years old. I had always enjoyed shooting rifles and felt that the subject of that essay was more about being a Native Appalachian and a tomboy surrounded by boy cousins than about the death of my father. Another essay I eventually published was about mental illness and the weather, and while telling the story of how my father took pleasure in watching storms, I also impatiently glossed over his death, which was never determined to be suicide or accident, but in the context of that essay seemed more likely to be the end result of his depression and divorce. I no longer believed the myth that he had tripped over his gun. A surprisingly dark essay I never published about snipers, revenge, and infidelity at the end of my marriage also revealed new information, that it had been a high powered rifle and not a shotgun that had killed my father. Yet another unpublished essay was entirely about the mystery of his death, and the story I’d heard that he had been playing a game with friends, they had been drinking, and his best friend had shot him accidentally when he leaned out from a tree. I am not sure how many of my other essays mention my father’s death, but for the first few years of my essaying life I found it to be the kernel of everything I wrote.

To be fair, a familiar or personal essay is utterly dependent on the rapport that the writer builds with the reader, and we come to know essayists through what is constant to their experiences and identities, in the same way we expect our friends to maintain some consistent version of themselves over time. Repetition is familiar, comforting, and natural. It is routine, the opposite of chaos. Of the philosopher, Immanuel Kant, Heinrich Heine wrote that: “Getting up, drinking coffee, writing, giving lectures, eating, taking a walk, everything had its set time, and the neighbors knew precisely that the time was 3:30 P.M. when Kant stepped outside his door with his gray coat and the Spanish stick in his hand.” I think we can all find some things that people repeatedly do to be a function of personality, and therefore we would expect the same characterizing, repetitive gestures in the writers we enjoy most. This is the continuity of style, of human nature to preserve the equilibrium of the self, which Kant termed “a certain uniformity.”

In my most recent writing project my father’s death is mentioned in four essays, and one of those essays, the first in the entire work, is an essay about repetition. This particular essay is called “Blueprint” and it explores the anxiety of repetitive error, especially with regard to love, and being afraid of making the same mistakes repeatedly. It is about falling in love with the same kinds of people who can repeat for me the pain of losing my father over and over again. 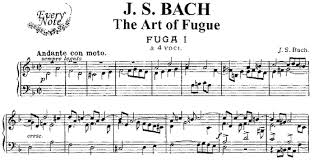 The essay is also about American Blues songs, Bach’s Art of Fugue, and musical structures in counterpoint, but it is at heart about feeling trapped in a cycle that is inescapable, a future that has been written out in advance. What if a central trauma in your life is the solitary track that you play over and over again in variation? A single theme that is repeated with only the voices shifting place, with regard to who carries the melody and when?

The anxieties that writers have over repetition may go far beyond this personal one that I mention here. There is the fear of not being original, of repeating a story of one’s personal experience that mirrors that of someone else, or of not finding new ways to tell one’s one experience to others without recycling phrases that have begun to seem like mantras. We can sometimes over-identify with the stories we tell others about ourselves to the point that we cannot see any other perspective. I can easily lock myself into the cage of that essayist who only writes about love or music or <fill in the blank here> of whatever it is that I return to again and again.

Repeating one’s self can take many forms, from being drawn to writing about the same subjects to reiterating personal details from one essay to the next. For others, repetition is like a mirror, perhaps even a lyric suggestion leading to productive digression which spirals out, advancing the breadth of the questions. Poets know the power of a repeated line, or a rhyming sound, the strength and beauty of repetition in a form such as the villanelle. Rhetoricians and orators know the energy embedded in the anaphora or the epistrophe, the repeated words or phrases at the beginning or at the end of clauses. Musicians could perhaps carry the ritornello (Italian for “little return”) forward to posit the origins of opera, and later concerto. Ritornellos are described as “guideposts” to the tonal structure of the music.

The vast Internet tells me that “A rhyme is a tool utilizing repeating patterns that brings rhythm or musicality in poems which differentiate them from prose which is plain.” As a prose writer who resists the notion that prose is not musical, I say that we see evidence in prose of repeated syntax or phrasing, and in the case of essayists, repeated themes and patterns of thought and mind which create the landscape of a written work. What we know of landscape is that distances seem shorter when the path is familiar. What we know of people is that they seem closer when they are familiar. What we know of prose is that lines and phrases become musical when they are repeated, that we like the number three or four in our repetitions, and this structure is familiar. It is a fact of orality and of rhetoric that the speaker will hold and develop the listener’s attention through repetition and that this is . . . familiar. It takes sitting through only one Baptist sermon to see how the power of repetition can move an audience to attention.

I return to Lopate’s passage from before and read that:

The essay form allows the writer to circle around one particular autobiographical piece, squeezing all possible meaning out of it, while leaving the greater part of his life story available for later milking. It may even be that the personal essayist is more temperamentally suited to this circling procedure, diving into the volcano of the self and extracting a single hot coal to consider and shape, either because of laziness or because of an aesthetic impulse to control a smaller frame.

The charge of laziness is fair I think, given that many times I have not felt ready to face everything about a particular instance in my life at once. I would rather deal with one moment at a time, and I do as a result crave that smaller frame. Laziness is perhaps the right word given that the work is sometimes too hard, and that it is only five years, ten years, twenty years later that some things make sense. Returning to material over and over again for an essayist is akin to taking the long view, of playing the long game with the stories of our lives. We do not know how this moment will feel three years out. We sometimes repeat our approach to the difficult matter, in order to find new ways to tell the story. I wonder if there is any story that is not a repeated thought in recombination.

Lists and patterns can carve a reality from nothing. And here we are far away from seeing writers repeating themselves as a failure or a decline; repeating ourselves can be instead the very core of who we are to people who have never met us, the persona and the artifice that we work to cultivate for the entertainment and enjoyment of others. The chaos, the things that we do not repeat, the parts of ourselves that do not fit any pattern—these are perhaps what constitutes life as it is lived, the life we consider private and painful and raw. It is the realm of accident and surprise, and peace comes in recovering the order and the patterns that root us and ground us, and we do not complain then about repetition, but crave it.

Desirae Matherly teaches at Tusculum College, and is the nonfiction editor for The Tusculum Review. Her most recent work appears or is forthcoming in Hotel Amerika and Fourth Genre, and in August 2017 she was the featured writer on ninthletter.com. Her essays have been anthologized in After Montaigne: Contemporary Writers Cover the Essays, Red Holler: An Anthology of Contemporary Appalachian Literature, and The Best Creative Nonfiction, Volume 2. Desirae earned a Ph.D. in nonfiction from Ohio University and is a former Harper Fellow at The University of Chicago.